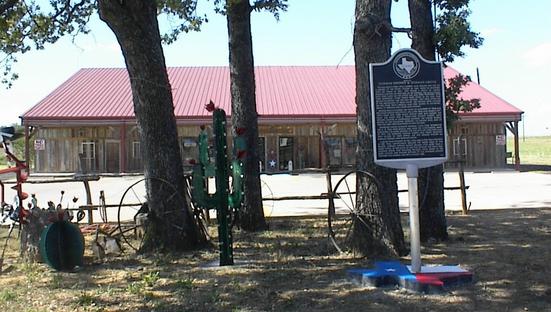 William Balch (1804-1870) claimed land around this site as a member of the Peters Colony in 1849. When he returned with his family in 1851, they found a group of Caddo Indians camping on one side of the springs. The Balch family built their cabin on the other side and lived peaceably with their neighbors. Other Caddo were living in the area that became Alvarado. Like the new settlers, they were attracted by the abundance of fresh water. The springs were located on the road from Birdville and Fort Worth to Hillsboro, Waco, Ft. Graham and other destinations. William Balch founded the town of Alvarado in 1854 and the family moved into town. Joe (1798-1882) and Sarah (1797-1897) Shaw and their family settled here and farmed the land. Joe Shaw was a three-term county sheriff. With settlers coming in increasing numbers, the Caddo Indians moved to the Oklahoma territory or further west, and by 1860 the area was dominated by new settlers. Tennessee native Lafayette Norman (1826-1904), veteran of the U. S. war with Mexico and later the Confederate Army, purchased 245 acres around this site with his third wife Julia In 1872. The Normans supplied thirsty and weary travelers with access to their spring; the site became known as Norman Springs and Norman Grove. A seven-year drought in the 1930s and a five-year drought in the 1950s significantly reduced the water table in this region. Norman Springs slowly became little more than a muddy patch. By the dawn of the 21st century, the once free-flowing spring that provided priceless fresh water to the early Indians and pioneer settlers of the Johnson County frontier was marked only by a willow tree. (2000)