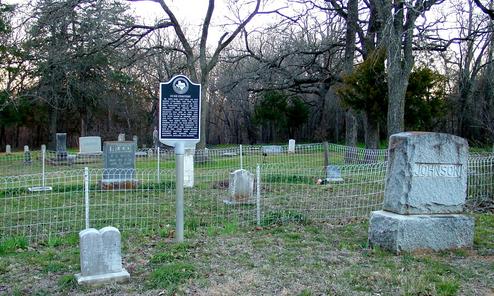 Dr. John Duke (1827-1884), his wife Martha (1836-1888), and their family moved to Johnson County in 1854. They established a farm in the area later called the Willow Springs Community. When their ten-year-old daughter Zilla died in 1870, they buried her on the family farm. Zilla was soon joined by siblings Orson and Lucy. Emma Griffin, a relative's child, was buried beside the Duke children in 1878. Dr. Duke deeded the burial ground to the community in 1879; four more Duke children had died by 1882. Other Willow Springs residents interred here include ranchers and farmers, teachers, merchants, ministers, and soldiers. (1998)