While William Balch was having Alvarado surveyed for town square, store buildings and family lots, he also had land surveyed for a cemetery located on the Ira Glaze land grant.

Joseph McClure, writing of the early days of Alvarado, was dismayed in 1917 because there were no stone markers at the grave sites of six early mothers of the Myers and Balch families buried in the Balch Cemetery.  In 1995 the Balch/Senterwood Cemetery Association members wanted a tombstone placed near the Balch crypt to pay tribute to these six women.  With the help of Nick Vasquez, from Modern Monument, and Frances Wood as a model, a monument was dedicated in 1995 to these six mothers who gave their lives to help settle this wild, uncivilized, pioneer country. 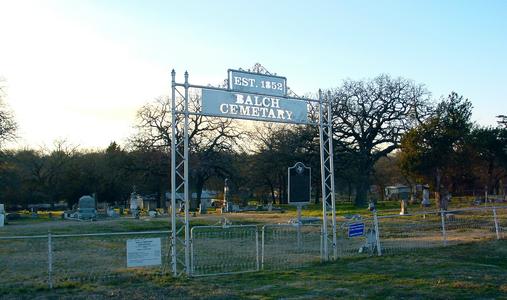