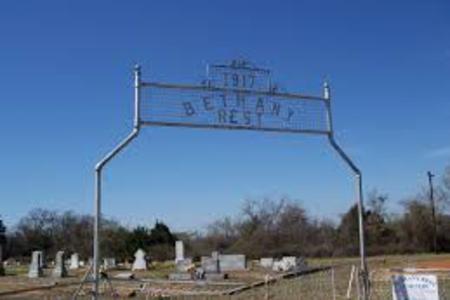 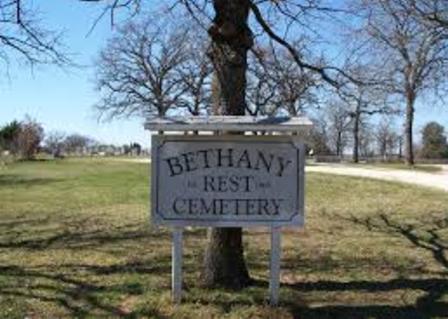 Bethany Rest Cemetery A small group of settlers from Alabama arrived in the Alvarado area, near Chambers Creek, in 1857. Among them were the Frost, Newby, Murphree and Head families. The family of Sampson and Betty Ann Blakely head settled about a mile north of this site in a community that came to be called Fairview. Their son A.A. "Ben" Head and his wife, Sarah Alabama Bethany Newby Head, donated two acres to Bethany Church, originally known as Head's Chapel, in 1903. In 1908, the trustees set it aside as a burial ground. Many of the earliest area settlers were buried in the nearby Buel and Jones cemeteries. At the church's burial ground, known as Bethany Rest Cemetery, the first marked grave, that of fifteen-year-old Marcy Thompson, dates to 1908. Earlier unmarked graves may exist. A cemetery association formed in 1917 and added a fence to protect the graves. The church congregation disbanded in 1960 and donated an additional acre to the cemetery, which today features curbed plots, metal fencing, vertical stones and gated entry. It serves as an important historical reminder of the surrounding rural community. Historic Texas Cemetery - 2002