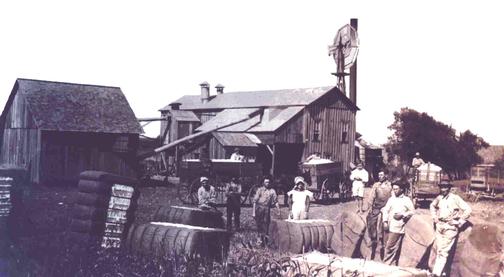 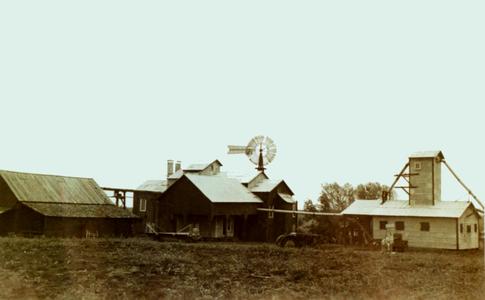 John Ezell (1857-1933) and his family moved from Alabama to Texas in 1867 and settled on a farm near here. The growth of cotton crops increased in Johnson County by the 1890s, and the need for more cotton gins became acute. In 1896 Ezell built a cotton gin on his land located halfway between the communities of Alvarado and Cahill; it became a major business in rural Johnson County. Although the cotton gin with its wooden siding was destroyed in an 1899 fire, Ezell rebuilt before the 1900 season began and installed new equipment. Cotton production continued to expand in the area and Ezell became a successful gin owner and farmer.

J. Otto McLeroy, Sr. (1883-1966) took over operations at the gin in 1917, and it became known as the McLeroy Gin. Cotton buyers were attracted to Alvarado by two rail lines that intersected there, bound for major cotton markets in Dallas, Fort Worth and Waco.

The McLeroy Gin continued to operate through the 1920s and 1930s, and finally closed in 1948. The building housing the cotton gin burned in 1953, destroying the remnants of a once-thriving business. (1997)