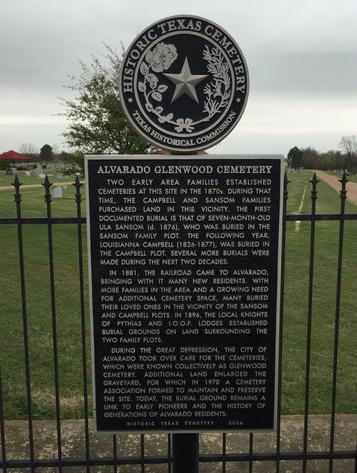 Two early area families established cemeteries at this site in the 1870s. During that time, the Campbell and Sansom families purchased land in this vicinity. The first documented burial is that of seven-month-old Ula Sansom (d. 1876), who was buried in the Sansom family plot. The following year, Louisianna Campbell (1826-1877), was buried in the Campbell plot. Several more burials were made during the next two decades.

In 1881, the railroad came to Alvarado, bringing with it many new residents. With more families in the area and a growing need for additional cemetery space, many buried their loved ones in the vicinity of the Sansom and Campbell plots. In 1896, the local Knights of Pythias and I.O.O.F. lodges established burial grounds on land surrounding the two family plots.

During the Great Depression, the City of Alvarado took over care for the cemeteries, which were known collectively as Glenwood Cemetery. Additional land enlarged the graveyard, for which in 1970 a cemetery association formed to maintain and preserve the site. Today, the burial ground remains a link to early pioneers and the history of generations of Alvarado residents. 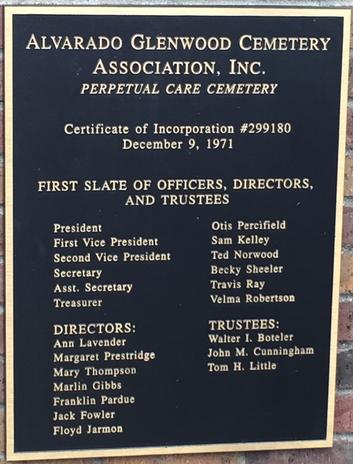