Samuel Houston Myers (1810-1874) and his wife Martha "Patsy" Wallace Myers came to Texas with their six children in 1851. Patsy Myers died in 1853; Sam Houston married Cynthia Ann Bales in 1854; she bore 5 children and died in 1865. Sam married Mary Hunter in 1866. The first recorded burial in this cemetery on the family farm occurred in 1873 with the death of a granddaughter, Mary Myers. Other early graves include those of Sam Houston Myers, a traveler named John A. Mullen who drowned in Quil Miller Creek in 1875, and an ex-slave known as "Aunt Rachel," twenty-one-year-old Sam Houston Myers, Jr. was hanged in 1880 for the murder of his stepmother Mary. His brother-in-law, James Bowden, later confessed to the crime. (1999) 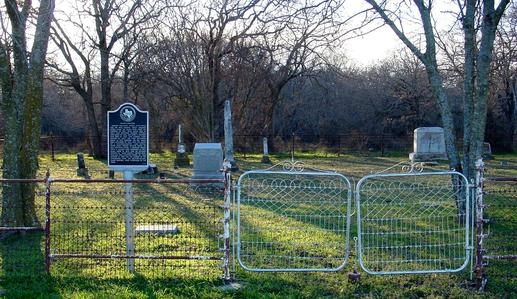